What is the current state of affairs? We have six people running for three positions and that is all that were nominated.  This is a fair and open election.

I know Brennan.  I have for a while.  I worked for him when he was CTO of the ARRL both as a member and then chair of the SDR committee and a member of the technical assistance corp.  Brennan is someone I both like and trust.   He assured me it was a fair election, he told me what he went through to get all those who were nominated on the ballot and all seems to have turned out just fine.

Brennan has denied any statements to the contrary.  I see no reason to pursue this further as a person running for the board since it detracts from other real issues facing the next board.  They are not small, in my opinion, and they will have nothing to do with the makeup and decisions surrounding the ballot.

I trust Brennan to run a fair election.

I’m Robert McGwier N4HY and I am running for the Board of Directors for AMSAT.  Many may remember that I wrote Quiktrak and raised significant money for AMSAT while I learned a lot. I will always be grateful to AMSAT for all it taught me. But you may not remember some of the other things that show why I feel AMSAT needs me. Help me and others make changes to AMSAT that can promise a bright future.

Here is why you should vote for me in this most critical year.

1) My work is a significant reason for the success of Software Defined Radio in industry, government, and amateur radio.  In the video linked below, you will hear Gerald Youngblood K5SDR of FlexRadio tell the story of my involvement. It happens at minute 29 in the TAPR DCC 2014 talk entitled “An Accidental Company”.  Gerald loves to tell this story.

AMSAT needs leadership that is competent in Software Defined Radio in order to participate in space. I am that person and I can help AMSAT. There is no other candidate with these qualifications, connections, and expertise.

There are three spacecraft in orbit and running successfully.  The next three are close to launching.  The company geolocates RF emissions on the Earth and builds analytic products for governments, industry, and search and rescue.  This started out very strong and will get much better with time.

a. Hawkeye 360 found the Chinese Army on the border with India and pointed it out to the world.   This story 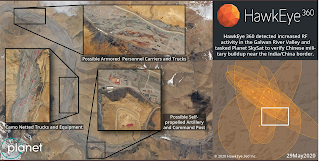 was carried on the front page of the New York Times and a major Indian newspaper with Hawkeye mentioned directly. 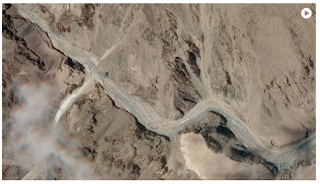 b. Hawkeye 360 mapped a large drop in radio communications on land and in the shipping yards in Shanghai and informed the US government that something major was happening in China before the world was awake to coronavirus.

c. Launch preparations for our next satellites are underway: Click here

d. The patents for the ideas I formulated are available to view online.

e. It is all software-defined and cognitive radio using things I learned in amateur radio and from my good friend Tom Clark, K3IO. Tom has been a director of AMSAT since the 1970s and he endorsed me as he retired this year.

a. Federated Wireless was founded with Dr. Joseph Mitola, considered the father of software-defined and cognitive radio by much of the world.  He will be glad to tell you we did that together in many cases working for the same government entity.  And, with Dr. Charles Clancy who is VP for Intelligence for the Mitre Corporation now.

b. Federated Wireless can and should completely alter the way the spectrum is handled.  Companies get “spectrum as a service” and don’t buy a channel and squat on it forever.  Large swaths of Radio Frequency Spectrum are set aside for DOD which has been shown to be easily protected by technology I patented with one of my students, Dr. Tim O’Shea.  Federated Wireless now holds the basic patent and sole rights to do the Environmental Sensors. These protect federal holders of the spectrum but allow wireless to use the spectrum when higher-priority federal holders are idle.

4) I was Chief Scientist (https://www.hume.vt.edu/personnel/detail?id=2) for ten years for the Hume Center for National Security and Technology at Virginia Tech. (https://hume.vt.edu/)

Influenced by my leadership and my early research contract success, it became the largest research center at Virginia Tech in terms of research dollars and in influence. I retired as chief scientist and became adjunct faculty of multiple departments and affiliated faculty with Hume Center.  While at VT and in this position I developed with a team the VT Camera, which has flown on two CubeSats.  The operational CubeSats still run the camera successfully when VT Ops schedules it. (https://www.amsat.org/ao-92-commissioning-update-transponder-and-camera-tested-further-camera-tests-planned/)

5) I’ve been a director, officer, and engineer for AMSAT in the past and a geek all my life.  I will share some pictures from my escapades in link form.
a. Rediscovery of Halley’s Comet on the continental US: 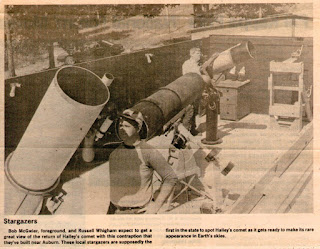 b. Team member as Asst VP Engineering for Microsats 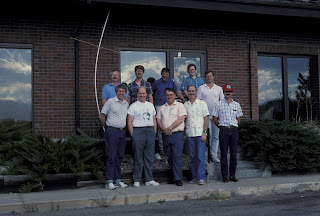 c. What is wrong with the Microsat Battery Charging System? 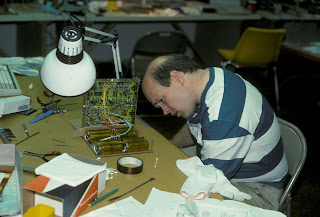 d. Author of Microsat command and control software that ran on all four spacecraft from thermal vacuum test until the death of the computers

e. Karl, me and others at first design meeting for AO40 in Germany 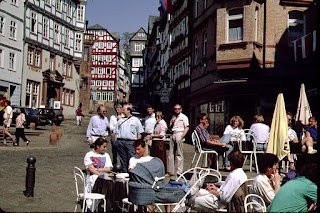 g. Spending Phil and Franklin’s amazing gifts for digital spacecraft for Phase 4B Geo where we were successfully added to the GEO mission on a USAF spacecraft that subsequently was canceled (sigh.. I will NEVER give up). In this photo, you can see Franklin Antonio, N6NKF,  Phil Karn, KA9Q, and Michelle Thompson W5NYV in addition to myself standing in front of Phase 4B's ride at Millennium Space Systems (before they were bought out). 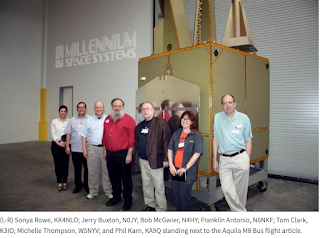 h. Software-defined radio in amateur radio began during the 1980’s with the AMSAT/TAPR DSP Project led by me and Dr. Tom Clark, K3IO.

You have the story and you can verify my achievements.  I have never stopped working for amateur radio and now that I am retired I will work harder.

I hope to lead another revolution in amateur radio with machine learning and artificial intelligence. This will provide world-class cutting-edge software products for amateur radio. I love AMSAT and I owe a lot to it.  Here are the two parts of the long-winded videos at TAPR/ARRL DCC.  Machine Learning applied to ham radio and spectrum Part I,  Part 2, and Part 3.

Why is this election critical?

Because of breakdowns in ordinary organizational processes, I will rectify this in the same way that I have accomplished in many other organizations, with competence, experience, expertise, forgiveness, and creativity.

There is a path forward. It should be towards the future, not the past. Open Source, collaboration with active and wonderful organizations, and honest and transparent corporate behavior are what I can deliver as your Director.

To say that I am deeply troubled by the public battles going on in and around AMSAT is an understatement.

The resignation of Joe Spier, the accusations of Michelle Thompson and Patrick Stoddard, and the surprising response by AMSAT officers are all deeply troubling.

My tenure as a board member will focus on total transparency. I will not hide bad news from members. You are owed the details of what is happening inside AMSAT. If elected, I will tirelessly seek those details for you.

1) If elected I will move to investigate any and all claims made by Michelle and Patrick and the response made by the other members of the board of directors. I will make all my findings public. If I am stymied in trying to investigate publicly, I will report that every week until such time as that changes.

2) I witnessed Joe Spier behaving badly to Michelle Thompson. He ordered her to hide her credentials and advanced degree because her accomplishments made Jerry Buxton feel “uncomfortable” and were “stressing him out” at the Reno, NV AMSAT Symposium. She was threatened with being found insubordinate if she didn’t immediately comply. I witnessed this firsthand.

I brought this up with multiple board members and officers to no avail. I believe that incident has led us directly to here but my belief is not a fact. It informs me that I need to investigate and I will. We have to treat productive volunteers better than this, and I will make this happen as a Director of AMSAT.

3) Michelle and Patrick levied specific claims against board members and officers and they received a response as already noted. I point out the following obvious facts. Michelle and Patrick listed documentary evidence, with references in their accusations. I do not believe that either is dumb enough to commit libel and/or slander in such a public manner. The opposing note was claims supported by the word of the signatories. This is deeply troubling and raised my level of anxiety for AMSAT’s well being considerable.

5) I will move to have a detailed audit of AMSAT finances and the findings made public, including details about AMSAT expenditures on lawyers in the actions taken around Patrick and Michelle’s election.

5) ORI, the 501c3 Member Society started by Michelle Thompson, has now raised tens of thousands of dollars in donations from a) ARRL Foundation, b) YASME, and c) ARDC. AMSAT is doing what? Sitting on its collective thumb? It is not a good comparison and I want to know why. Yes, all of this money is being used to directly benefit AMSAT. Why isn’t AMSAT doing better compared to an organization that has been in business for just over a year? Why aren’t we working with successful amateur radio organizations, instead of against them?

I am here to do all of these things and more.

Bob N4HY
I've been an Amateur radio operator since 1964. I graduated from Brown University and have a Ph.D. in Mathematics.